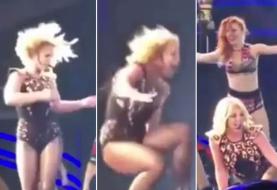 ) has cancelled at least two of her shows in Las Vegas this weekend after injuring her ankle in an onstage fall.

"Britney injured her ankle during her performance Wednesday evening and her doctor has advised her not to perform Friday and Saturday evening so that she may heal," reads a statement from her publicist.

In a video from the show, the pop star is seen tumble to the ground in her high heels while surrounded by backing dancers, clutching her ankle, before being helped to her feet.

"Sorry about that," she told the audience, before resuming her performance with a limp.

"Thank you for all of the sweet wishes! Had a little scare on stage tonight with my ankle but I'm ok!," she later told fans on social media.

"Your kind words mean everything to me! I'm rescheduling this weekend's shows and will let ya'll know when we have the new dates."

You can watch the moment in the video below, near the end of the clip: