British Papers Complain New 'Doctor Who' Is 'Too Sexy'

A number of papers around the UK are complaining that the latest incarnation of 'Doctor Who' is 'too sexy'.

The Saturday night return of the Doctor not only introduced us to Matt Smith as the new Time Lord but Karen Gillan as his a new companion Amy Pond.

But according to the 'Daily Mail', Gillan's appearance as a kissogram, dressed as a policewoman in "an almost non-existent miniskirt" caused "a flood of comments" that "threatened to overshadow" the episode.

As for viewers seeing the briefest glimpse of Smith's upper body while he changes into new clothes, the 'Telegraph' writes Amy "watched as the Doctor completely undressed in front of her, before donning his new outfit of a tweed suit and bow tie."

'Metro' goes a step further to say that the first episode has sparked "a wave of complaints on fan forums across the internet as viewers complain the sci-fi adventure has become too sexy."

It must be April Fools because all three articles use the same comments from just two viewers -- nowhere close to a 'flood' or 'wave' of complaints.

"Why did she dress up as a tarty policewoman? Surely that's not fitting for a family show," asks one.

In fact, the 'Telegraph' even went so far as to get a response from Karen Gillan about her attire.

"I tried on different things and when it came to the short skirts, I just thought it was right," explains the actress. "I mean, look down most high streets and girls Amy's age wear that. It's not that weird."

"Short skirts show that Amy is confident and comfortable about her look. You have to have confidence to wear something like that."

Piers Wenger, the executive producer of Dr Who, also gives his own defense in the paper: "The whole kissogram thing played into Steven's desire for the companion to be feisty and outspoken and a bit of a number."

"Amy is probably the wildest companion that the Doctor has travelled with, but she isn't promiscuous. She is really a two-man woman and that will become clear over the course of the episodes."

Check out a photo of Karen Gillan in her policewoman outfit below: 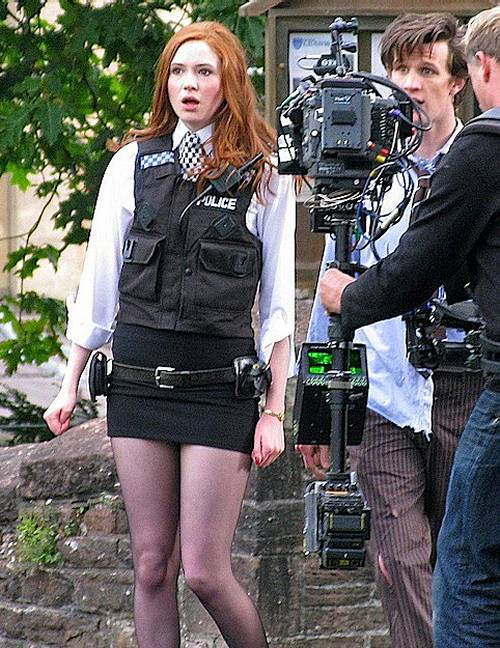