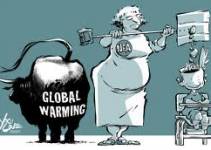 "Doing nothing about climate change is still a fairly common affliction, even in this day and age. What to do with those people, who are together threatening everybody's existence on this planet?"

"Clearly we don't really think they should be blown up, that's just a joke for the mini-movie, but maybe a little amputating would be a good place to start?" jokes 10:10 founder Franny Armstrong.

"We have got about four years to stabilise global emissions and we are not anywhere near doing that. All our lives are at threat and if that's not worth jumping up and down about, I don't know what is. We 'killed' five people to make No Pressure – a mere blip compared to the 300,000 real people who now die each year from climate change."

Needless to say, after plenty of backlash, the graphic and controversial ad has since been pulled by 10:10.