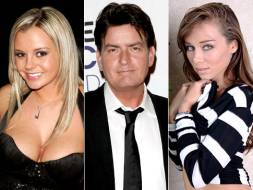 Charlie Sheen revealed he was HIV positive on the 'Today' show Tuesday.

In making the announcement, the actor said he always informed anyone he was involved with of his status and even had his own doctor provide care to the women.

However, Sheen's ex Bree Olson says that's not true. The former adult film star says she learned of the possibility just a couple of days before it became public.

"He never said anything to me. I was his girlfriend, I lived with him. We were together," Olsen tells Howard Stern.

"We had sex almost every day for a year with lambskin condoms, which do not protect. There were times we didn't even use condoms, because it was only to prevent pregnancy."

"We were sleeping together every single night. He never said anything ever. 'I'm clean,' he said."

"I hesitated, and I made the same mistake that a lot of people do. I trusted him."

Olson says it was "stressful" but she tested negative for HIV.

"I have not spoken to him in quite some time," says Olson . "I loved him, yes, he was my boyfriend. I left the industry for him, and I never went back."

"I had spoken nothing but positive things about Charlie...but I am so upset. I couldn't be more angry. I've been shaking, I've been crying."

Olson had a three-way relationship with Sheen and model Natalie Kenly in 2011, because she said she believed "a man should be able to be with as many women as he likes."