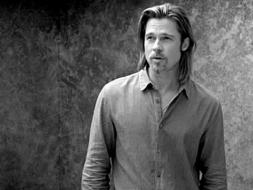 Brad Pitt cozies up by Stephen Colbert as they contemplate humanity's most big questions under the stars.

"Hey Stevie-C, Do you think mathematics are the underlying structure of the universe, or did we just invent it?," Pitt asked the host.

"Whoa. Blew my mind, Brad," replied Colbert. "I'm not sure if numbers are the underlying reality. But one thing is absolutely true: You're a solid eight."

"Is it possible to describe infinity?," Colbert asked. "Yes. Yes, it is," the actor replied. "It's one less than the number of Ocean's sequels we're going to make."

"Do you think anyone can ever truly know themselves?," Colbert wondered.

"Doesn't matter," Pitt replied. "In the end, turns out we were all Edward Norton the whole time."