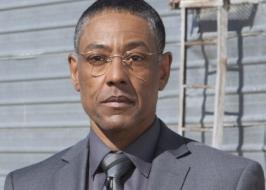 Fans have been speculating about Gus Fring appearing on 'Better Call Saul' almost since the show began.

With its upcoming third season, producers are hinting that Fring will return.

In fact, one fan noticed that if you take the first letter of each season three episode title, it spells out "Fring's Back."

Of course, Gus Fring was the notorious drug kingpin under the guise of a chicken store owner played by Giancarlo Esposito on 'Breaking Bad'.

Odenkirk admitted that probably wasn't an accident but show producers were likely hoping no one noticed this early.

The actor says he's can't provide much more because he tries to find out as little as he can before he actually films the episode so he can "react to the moment."

The bad news? 'Better Call Saul' season three isn't expected to premiere until 2017. The first two seasons have premiered in February of each of the past two years.