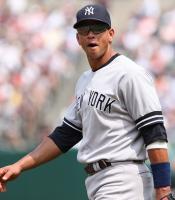 In an appearance on 'The Tonight Show', Bob Costas talks about a possible lifetime ban for Alex Rodriguez from baseball.

"That would be if he does not accept -- what I think they would be content with -- which is to be suspended for the rest of this year and all of next year and not appeal it," says Costas.

"But since he is saying and his representatives are saying that they will appeal any suspension of any type, what baseball doesn't want is that he's on the field playing while this whole thing is playing itself out," Costas explains.

"So if they suspend him for life, there's a provision where the commissioner can act in the so-called best interests of baseball, so it wouldn't be just for drug violations, it would be for a variety of other offences connected to it. Then they could keep him off the field until the appeal would be heard likely until the season is over."

"What I really think will happen is that presented with the evidence they'll wind up accepting a lengthy ban but not a lifetime ban."

Leno asked if it was fair to say that baseball "turned a blind eye" to drug use and is "finally getting serious."

"That is a fair statement," says Costas. "It was obvious. Not just the body types but the changes in statistics, the quantum leap in statistics that just didn't make any sense. It was obvious something was going on and when they finally got religion on it, so to speak."

"And a lot of players then turned on their own leadership... a lot of which has since moved out and replaced by Michael Weiner and said look we want a clean game."

Of course, the mere mention of anything Weiner got laughs from the audience.

"No, not Anthony Weiner," Costas said.

"This is the good Weiner," quipped Leno. "This is not the evil Weiner. Not all Weiner's are bad."

"What could be more American than a hot dog at the ball park, right?," Costas added.

"As long as it stays in the bun," joked Leno.