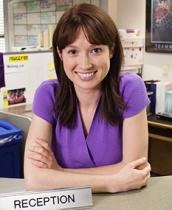 On Monday night's 'Late Late Show', host James Corden introduced a new game in which he and his guests would put on blindfolds and use their faces to nuzzle and figure out the mystery item.

It started out as all fun and games with grapes and a giant gummy bear... until Ellie Kemper, Nick Offerman and Thomas Middleditch had to nuzzle a live snake and a sumo wrestler.