Blake Shelton: 'I Don't Blame' Fans For Wondering Why Gwen Stefani Is With Me 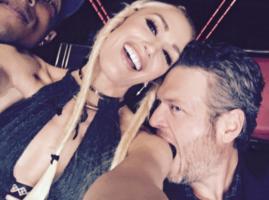 Blake Shelton says he's not completely surprised when fans wonder why Gwen Stefani is with him.

"In people's defense, I think it's so hard for people to wrap their head around why Gwen would want to be with me," Shelton sat during an interview with fellow 'Voice' coaches Adam Levine, Alicia Keys, and Stefani.

Asked about the constant headlines around their relationship, Shelton said: "I don't think it's mellowed out, really. I think we don't pay as much attention anymore. We're numb to it."

"Any time you see a story about us, it's either that it's a fake relationship or that we're already married. Or we're gonna get married, or she's on her second set of twins. Or, you know, I'm sneaking behind her back to eat meat. I eat meat right in front of her face!"

Stefani, of course, is a vegan. The couple has been together since they began dating at the end of 2015, during Stefani's first season of 'The Voice'.