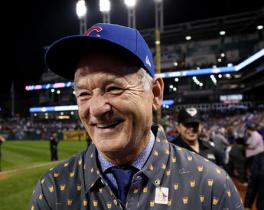 Chicago Cubs fan Bill Murray reacted like every fan when his beloved team made history by winning the World Series against the Cleveland Indians and breaking a 108-year curse on Wednesday night.

Murray travelled to Cleveland for the game and at Game 6 a day earlier gave a random Chicago Cubs fan a ticket to the game after she struck out at the box office.

And it wasn't just any seat, it was rows behind home plate and right next to Murray himself.

Some of the moments capturing Murray's excitement.

I think I'm the most happy for Bill Murray. pic.twitter.com/SnvWxYbFwC