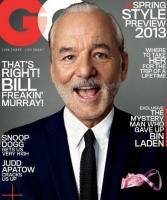 Bill Murray says he doesn't have to think hard to remember his favorite part of George Clooney and Amal Alamuddin's wedding in Venice.

Murray, who delivered a toast, previously joked that the wedding had "everyone just in T-shirts, you know, real casual."

"I did get to say something. I can't really recreate it, but it was something about the fact that -- a lot of people, it seemed, put their lives on hold until these people found their happiness. Because they're both very, very, very good people and very considerate and thoughtful of their friends and families."

"These two — it's just miraculous that they found each other because they are so ideal for each other," he continued. "People were very emotional about the fact that these two people found someone. That really was a great part of the party."