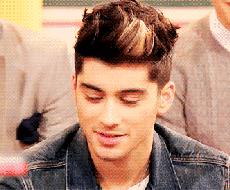 Zayn Malik's departure from One Direction has been big news and even 'Real Time's Bill Maher couldn't help but reference the story this weekend.

But probably not in a way that Malik's die-hard fans will be happy about.

Maher jokingly compared Zayn Malik to Boston marathon bombing suspect Dzhokhar Tsarnaev as she showed a photo of them side by side.

"Zayn Malk can just go ahead and quit One Direction for all I care," said the host. "I mean, whatever. But I think after everything we've been through, I at least deserve the common respect of being told face-to-face."

"Just tell me two things, Zayn: Which one in the band were you? And where were you during the Boston Marathon?"

One fan ranted complained was "disgusting, racist and Islamophobic."