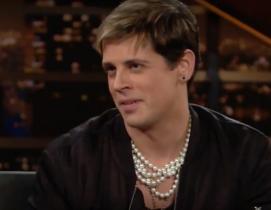 Bill Maher is taking credit for the rapid downfall of Milo Yiannopoulos.

The controversial public speaker lost his lucrative book deal and job at Breitbart News days after his appearance on 'Real Time with Bill Maher' prompted the cancellation of his Conservative Political Action Conference (CPAC) speech.

It wasn't Yiannopoulos' appearance on the talk show and instead an old interview, in which he stated that sexual relationships between 13-year-old boys and adults can be "consensual", that led to his rapid change in fortune.

But that isn't stopping Maher from taking some of the credit.

"What I think people saw was an emotionally needy Ann Coulter wannabe, trying to make a buck off of the left's propensity for outrage," Maher said of Yiannopoulos.

"And by the end of the weekend, by dinnertime Monday, he's dropped as a speaker at CPAC. Then he's dropped by Breitbart, and his book deal falls through. As I say, sunlight is the best disinfectant. You're welcome."

Maher's booking of Yiannopoulos had prompted plenty of outrage because of his reputation as a provocateur. Now, some of the comedian's fans are jokingly asking him to invite White House chief strategist Steve Bannon.