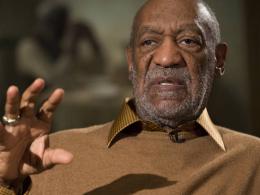 With now multiple women coming forward against Bill Cosby, the Associated Press has released previously unseen footage from an interview it conducted with the comedian earlier this month in which he asks the interviewer to "scuttle" the sexual assault allegations.

The interview about artwork Cosby had loaned to an exhibition in Washington, D.C. was conducted on November 6.

After being asked about the allegations, Cosby, sitting with his wife, says: "There is no comment. There is no comment about that, and I'll tell you why. I don't want to compromise your integrity, but I don't talk about it."

At the end of the interview, not aware that the cameras were still rolling, Cosby asked for assurance that his "no comment" was not used or referenced in the interview.

"Can I get something from you? That none of that will be shown," Cosby said. "I know I didn't say anything but I'm asking for your integrity since I didn't want to say anything."

"But I did answer you in terms of I didn't want to say anything... and I would appreciate it if it was scuttled," Cosby said.

"If you consider yourself to be serious, then it will not appear anywhere."

"And we thought, by the way, because it was AP, that it wouldn't be necessary to go over that question with you," Cosby said.

"If you would tell your boss the reason why we didn't say that up front is because we thought the AP had the integrity to not ask."

After the interviewer says the question was something his bosses wanted asked, Cosby instructs his publicist to "immediately" get on the phone to make sure it doesn't get out.