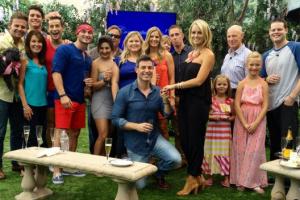 'Big Brother' alums Jeff Schroeder and Jordan Lloyd are engaged after Jeff finally popped the question during a return inside the house.

Jordan believed the couple was back in the house to conduct a special luxury competition for the contestants. However, when the pair went into the backyard, Jeff got down on bended knee and proposed to Jordan.

The couple, who met on Big Brother 11, have been dating since meeting on the reality competition in 2009. Jordan was still in shock after the proposal that they finally took the next step.

Rachel Reilly and Brendon Villegas along with Dani Donato and Dominic Briones also married after meeting on the series.