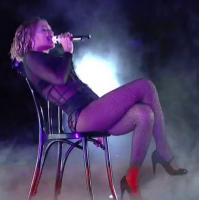 ) has postponed her MetLife stadium concert at the last minute so she can get some rest.

Apparently under doctor's orders for vocal rest, the superstar singer has postponed the September 7 MetLife Stadium stop of her Formation World Tour until October 7.

Fresh off her VMAs performance at Madison Square Garden, Beyonce told fans on Monday that she won't be able to perform the New Yori show.