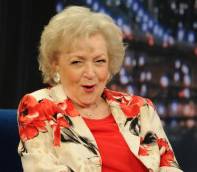 Betty White pranks James Corden by calling with some odd special requests before her appearance on 'The Late Late Show'.

"My dressing room as it is now is brown and there's nothing worse than brown," says White.

When Corden explains that it's not brown but rather an off white cream, White replies: "Cream is just brown milked down."

She also tells the host, repeatedly calling him Johnny, that she only likes the yellow M&Ms.