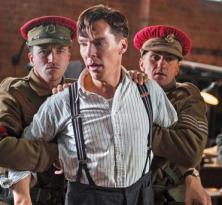 Benedict Cumberbatch passionately tells Alan Turing's life story, who he portrays in 'The Imitation Game', in three minutes during his interview with Jimmy Kimmel.

Turing has been officially pardoned by the state but Cumberbatch has signed a petition for similar treatment for others who were treated in the same manner.

He has also been nominated as Best Actor for his role in the film.