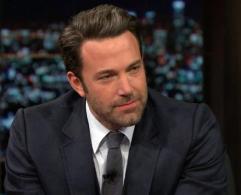 In an appearance on 'Real Time' last month, Ben Affleck got into a heated debate about Islam with the host and his guest.

Affleck took issue with Maher when said Islam was "the only religion that acts like the Mafia" and his guest added "Islam was the mother lode of bad ideas."

The actor took some flak from commentators like Bill O'Reilly, who remarked Affleck "would be beheaded in a heartbeat by ISIS."

But Affleck says that's not going to stop him from speaking his mind.

"I was ultimately making a 'Sesame Street' argument. You don't judge a whole group of people based on the actions of a few," Affleck says.

"That's the environment around my dinner table when we talk politics," he said. "I think I'd rather tell the truth and say what I believe in and make people unhappy than sort of pretend to think something else to accommodate them and try to be liked."

"That's just the way it goes and I don't think I'm any great champion of anything, but if they're going to put me on a show, I'm going to say what I think."