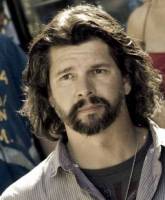 Moore has just sold a Western procedural drama set in the early 1900s in an expanding frontier town called 'Hangtown' to ABC.

The show will center on a Marshal who likes to solve crimes with his instincts, a young doctor from the East Coast working with forensics in its infancy and a young female writer who authors novels about crimes in the wild west.

If it's premise sounds similar to USA Network's 2003 series 'Peacemakers', thats because it is.

That show was set in the 1880s with two detectives, Tom Berenger and Peter O'Meara, in the lead and Amy Carlson as the town's mortician.

One wonders if ABC may get a call from the creator of 'Peacemakers'.

The network won 'Hangtown' in a bidding war with NBC, which failed to pick up Moore's cop drama '17th Precinct' in a world ruled by magic instead of science.