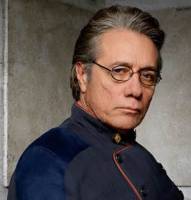 Edward James Olmos, best known for playing William Adama in 'Battlestar Galactica', has joined the cast of 'Dexter' for its sixth season.

The Emmy and Golden Globe-winning actor will play "a brilliant, charismatic professor of religious studies."

Colin Hanks will play a highly intelligent ancient artifacts expert who may be linked to a series of grisly murders while Mos Def will play the role of an ex-con still involved in his share of violence.

Production on the upcoming season of 'Dexter' begins Wednesday in Los Angeles. The show's fifth season was its most-watched to date averaging over 5 million viewers a week, combining its airtime and on-demand audience.