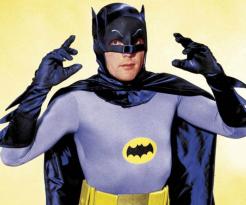 Los Angeles City Hall was lit up with the Batman Bat-Signal on Thursday night in a tribute to late actor Adam West.

Mayor Eric Garcetti and Police Chief Charlie Beck switched on the iconic signal and projected it on the wall of City Hall.

"Like you, we all spent many hours in front of the TV, same bat time, same bat channel," Garcetti said. "Adam West taught us each one of us had a heart of gold."

A closer shot of the #BatSignal shining on LA City Hall. All the feels. Just wish Mr. West could have seen it. #AdamWestTribute #Batman pic.twitter.com/sBCHtEt0Gu