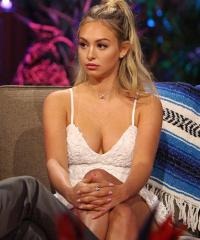 Corinne Olympios finally appeared on 'Bachelor in Paradise' Tuesday to tell her side of the story.

The 24-year-old sat down with Chris Harrison to discuss the scandal between her and DeMario Jackson that shut down production on the series earlier this summer.

At the time, Olympios painted her as a "victim" who was "trying to make sense of what happened." However, on Tuesday night, she admitted that the man who has been vilified didn't do anything wrong.

"I honestly don't feel like he did anything wrong," she said of DeMario Jackson. "I really just want people to know that I don't blame DeMario. I never pointed fingers at DeMario. I never said a bad word about DeMario."

"I would want to tell him, like listen, I respect you as a human. I have nothing against you. I am so sorry you had to go through this. I know exactly what it feels like... and I wish you all the best and I'm sorry."

DeMario Jackson recounted his sexual encounter with Corinne Olympios in explicit detail following the backlash and said he felt like he was setup to be the fall guy.

In the interview, Corinne said she still doesn't remember much of what happened.

"I definitely overdrank. I was also on some medicine that you're not supposed to drink on, which I didn't know. The combination of the two is just not a good combination, I am now weaning myself off that medication," said the 25-year-old.

"I was mentally checked out... which is beyond scary, but it is what it is I guess. I don't think it's anyone's fault, I just think that it was, again, an unfortunate and annoying situation that had to go down and it really sucks."