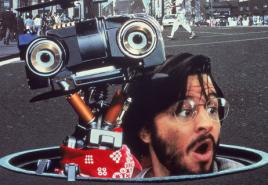 Aziz Ansari tells Conan O'Brien he had no idea that it was actually a white actor who wore brown face makeup to portray an Indian in the 'Short Circuit' movies.

So when he discovered the fact, he reached out to Fisher Stevens to see how it came out.

Ansari found that Stevens was cast when the character was supposed to be white and later worked with a coach when it was changed to be of Indian origin.

Now, in his appearance with Conan, Ansari gets the opportunity to explain why the casting was so wrong to Johnny Five.

And, if you're wondering, Jumbo's Clown Room is a strip club.