Ashton Kutcher's 'Two and a Half Men' Contract Just One Year 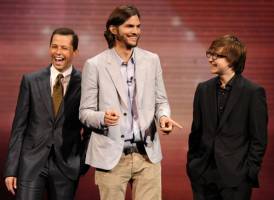 Ashton Kutcher, who was officially introduced by CBS as the new star of hit comedy 'Two and a Half Men' last week, only has a one year contract.

That's in part because CBS has licensed the Warner Bros. TV show for only one more season at this point.

Although they could certainly extend Kutcher's contract, the revelation will give plenty of fodder to those who believe Kutcher won't succeed as Charlie Sheen's replacement and the move will be a ratings flop for the network.

CBS is obviously hoping the move will keep 'Men' the ratings success it was but the single year contract underscores that bosses consider it far from a sure thing.