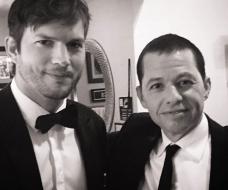 With 'Two and a Half Men' wrapping up its run on Thursday night, Ashton Kutcher is thanking co-star Jon Cryer with a heartfelt tribute.

Kutcher joined the cast of the series four years ago, following Charlie Sheen's firing in 2011.

"Thank you Mr. Cryer for making this job never feel like work. I will miss working with you every day," Kutcher said as he shared a photo with Cryer on his Facebook page.

"You are a true partner in every sense of the word. In four years I never heard you complain and never heard you speak ill of another person even if they took advantage of your kindness and generosity," he wrote.

"You are a gentleman. You are a talent. You are someone I look up to."

On the series finale last night, Charlie Sheen made a momentary return -- of sorts -- as it was revealed that Rose had been holding Charlie Harper hostage in a dungeon underneath her house.

Played by a body double and only shown from behind, the playboy made a return to his home in the final moments only to have a baby grand piano fall on him and cement his demise.