Ashton Kutcher Throws Shade At Jimmy Fallon Over His Mustache 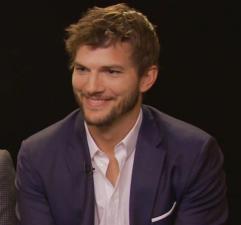 Between singing 'You're Welcome' from Moana and talking about his new Netflix comedy series 'The Ranch', Ashton Kutcher throws shade at Jimmy Fallon over 'The Tonight Show' host's mustache.

"You've got a great cast and great chemistry," Fallon began by complimenting the series.

"Thanks, man," replied Kutcher. "And I've got the real mustache man: Sam Elliot. He's like the God of mustaches."

"This thing's really bugging you too. I can tell you're struggling with it."

"I know," said a grinning Fallon. "It'll never be his. Yeah, people on the street think it's fake. Why would I walk around with a fake mustache?"

"Why would you walk around with a real one?," quipped Kutcher.