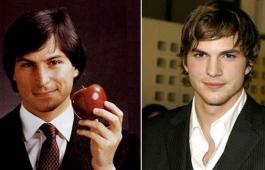 Ashton Kutcher believes Steve Jobs was "the Leonardo da Vinci of our time."

On 'The Tonight Show' to promote his new film on the Apple founder, 'Jobs', the 'Two and a Half Men' star said it wasn't until Steve Jobs' death that he realized how much he had affected his life.

"And that really affected my decision to take on the role. It was actually the day that he died, and for me, I'll never forget the moment that I heard he died," he said. "I pulled my car to the side of the road and kind of took a moment."

"I got home and I realized all the relationships that I have in my life are held together by the glue that he laid down."

"And all the work that I do, in whatever capacity I do it, and the entertainment I consume, and I realized I had taken him for granted. And taken for granted the contribution that he actually gave to society and I actually had a real emotional moment that day."

"So when I got the script I wanted to ensure that his legacy was told by someone who really admired it."