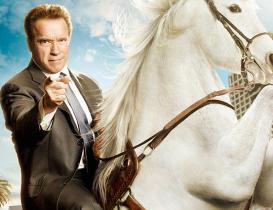 Arnold Schwarzenegger is speaking out about the President-Elect and former 'Apprentice' host's executive action that bans immigrants from seven Muslim majority countries from entering the US.

Schwarzenegger, an immigrant from Austria, tells Extra: "I think the real problem is that it was vetted badly. If they would run this by the Justice Department and Homeland Security and had the lawyers really study and focus on it and give it some time to do it the right way."

"I know what he's trying to accomplish — his fear about people coming in from other places, causing harm to the country. There is another way to going about it to do it the right way and accomplish all of the goals. I think they were hasty with it."

"To go and ban people who have a green card, that means that the United States of America has given you permission to work here permanently and you are on the way to permanent citizenship," he says.

"I was in that position… It's crazy, it's crazy and makes us look stupid when the White House is ill-prepared to put this kind of executive order out there."

"You go in there new, you have a new team and mistakes are made; I hope this is a wake-up call for them."

Schwarzenegger, who served two terms as governor, says he would've run for president himself if he could have.

"I wasn't born to be a politician, I was born to go and be successful and give back. I have no interest in it now after I have done that… I did my thing. The next job up would be running for president, which is out of the question because I was not born in the United States."

The 69-year-old also had some advise for Trump: "The laws that stick the longest are the ones when both parties work together."