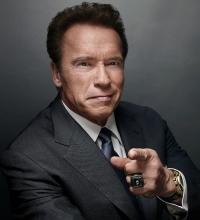 Arnold Schwarzenegger is walking away from 'The Celebrity Apprentice'.

The host, who had replaced Donald Trump on the reality series, says he won't be returning to the series Trump still continues to executive produce.

Schwarzenegger says he's leaving not because of the experience of the show but rather the reputation of the embattled NBC series being associated with the polarizing President.

"I loved every second of working with NBC and Mark Burnett," Schwarzenegger explains. " Everyone — from the celebrities to the crew to the marketing department — was a straight 10, and I would absolutely work with all of them again on a show that doesn't have this baggage."

"With Trump being involved in the show, people have a bad taste and don't want to participate as a spectator or as a sponsor or in any other way support the show," he adds. "It's a very divisive period now, and I think this show got caught up in all that division."

Ratings for Schwarzenegger's season were mixed and it's very likely that NBC won't renew the property at all.

Trump weighed in on Twitter about the end of the series that likely helped him secure the presidency.

"Arnold Schwarzenegger isn't voluntarily leaving the Apprentice, he was fired by his bad (pathetic) ratings, not by me," he wrote. "Sad end to great show."