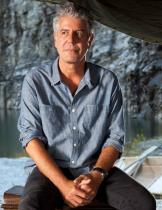 Anthony Bourdain has made no secret of the fact that he's not a Paula Deen fan.

He once called her "the worst, most dangerous person to America" because she was proud "of the fact that her food is f--king bad for you," after all.

But the star of 'No Reservations' and CNN's 'Parts Unknown' says he isn't enjoying watching the celebrity chef's fall from grace.

"It gives me no pleasure at all," Bourdain tells the Orlando Sentinel. "It ain't pretty, either the charges or the reaction."

"I may have been an adversary or a critic of Miss Deen. It gives me no pleasure to see her torn apart by the people who were kissing her ass a week before."

The second season of 'Parts Unknown' begins on CNN on September 15.