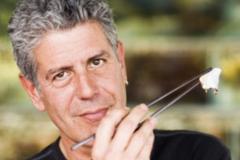 Anthony Bourdain is leaving Travel Channel to host his own show on CNN.

The chef and 'Kitchen Confidential' author who hosted the network's 'No Reservations' will make the shift to CNN as it tries to broaden its outlook beyond news.

Bourdain yet untitled show, which will air Sunday nights, will be produced by the same crew behind his Travel Channel series and also focus on various "cultures from around the world through their food, dining and travel rituals."

The series is currently slated to join the CNN schedule in 2013.

"I'm really looking forward to coming over to CNN," says Bourdain. "I think the world is going to get a whole lot bigger for me."

"I hope that old fans and new ones will be excited about what's coming down the road."

The outspoken Bourdain, who voiced his displeasure with Paula Deen in January, was immortalized in an episode of 'The Simpsons' entitled 'The Food Wife' last year.