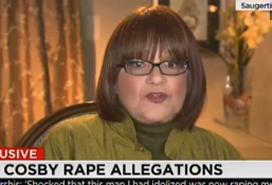 Former actress Joan Tarshis is the latest woman to come forward to allege that she was raped by Bill Cosby.

Tarshis appeared on CNN on Monday night and revealed details of the alleged rape on 'CNN Tonight with Don Lemon'.

She said their first encounter happened after taping an episode of 'The Bill Cosby Show'. Tarshis said she was drugged by Cosby at his bungalow and he forced her to give oral sex.

"I said, if you have sex with me your wife is gonna know it because you probably will infect her," Tarshis said. "I thought I was very clever in saying that, but he was more clever and instead he made me have oral sex with him, which really was just horrible. To me it's much, much worse than had he just raped me the normal way."

She was 19 at the time, in 1969, and she didn't tell anyone because she "idolized" Cosby and no one would have believed her.

"First of all, no one else had come out. I didn't know his history. I assumed I was not the only girl that he was doing this with, but who's going to believe me?," she explained.

Tarshis said she felt a lot of "guilt, a lot of shame" and called Cosby a "serial rapist."

"When you rape at least 16 women, that's serial, that's a serial rapist, in my opinion," she said.

Cosby, literally, sat in silence when asked about the accusations during an interview this past weekend. His lawyer has said that the comedian "does not intend to dignify these allegations with any comment."

It is worth noting that Cosby settled with accuser Andrea Constand, who filed a civil lawsuit against him that was settled in 2006.

Much like the other women, Constand had accused Cosby of drugging and sexually assaulting her in 2004.