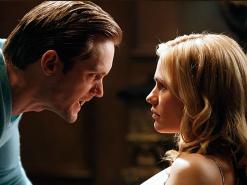 Anna Paquin is laughing after her breasts were accidentally shown in the background of a live BBC newscast.

The BBC gave viewers an unexpected eyeful when someone in the newsroom appeared to be watching an uncensored 'True Blood' sex scene.

The scene, featuring Anna Paquin topless, was being watched by a man wearing headphones and could be seen behind anchor Sophie Roworth as she read the night's news.

Not knowing what he had just seen, one confused viewer asked on Twitter: "Did I just see boobs on News at Ten?"

"MY BREASTS!! SO FUNNY ON SO MANY LEVELS," laughed Paquin after fans sent her the clip. "Now that I know what u guys were talking about... this some of the funniest s--t I've seen in a while!!! Thanks for the giggle!"