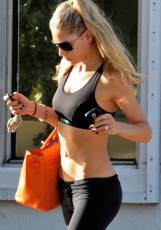 ) has been signed on to replace Jillian Michaels as the trainer on NBC's 'The Biggest Loser'.

NBC made the announcement Tuesday night during the live finale of the reality show, during which the tennis star made an appearance.

The decision to go in a new direction with the show's trainer is part of an overall reboot, according to executive producer Todd Lubin.

"We intentionally tried to not replace Jillian," he explains. "We will be getting slightly away from just the tape measure, and getting into overall well being and health. That's where Loser needs to go."

"Anna Kournikova grew up with very little in Moscow, pounding tennis balls every day when she was 5," he adds. "That's the drive she's bringing to the show."

Along with Michaels, trainers Brett Hoebel and Cara Castronuova, who joined the show this season, will also not be returning for the show's twelfth season.