Anna Faris: 'Life Is Too Short' For Someone Who 'Doesn't Have Your Back' 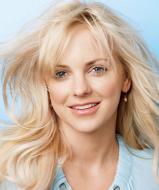 ) is opening up about her surprising split from Chris Pratt.

The 40-year-old actress offered the advice on her 'Unqualified' podcast and said she struggled with her own independence.

"Don't be afraid to feel your independence if things aren't right. I made that mistake, I think, a little bit, like 'I'm checking my relationship off the list,'" she admitted.

Faris and Pratt announced their separation after 8 years of marriage last week.