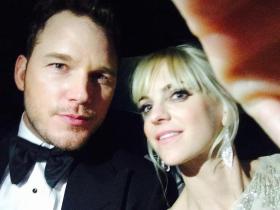 ) doesn't believe that your partner should be your "best friend."

In an essay for Cosmopolitan that was adapted from her book 'Unqualified', the actress, who recently split from husband Chris Pratt, says she thinks each serves a different purpose.

"In my 20s, I thought it was cool to say I was a guys' girl," she begins. "I didn't realize until later how lame I sounded, bragging as though having a lot of girlfriends was a bad thing... I touted my male friends as if my association with them spoke to how cool I really was."

"I was selling my own gender down the river, and I wasn't even getting any fulfillment from the relationships with those dudes."

"Growing up, I fell victim to plenty of mean girls who would sneak up on me and snap my bra strap. It may sound like a small thing, but when you're a quiet teenager trying to get through high school unnoticed, that kind of unwanted attention is rough."

"One day, I went to my locker, and the words 'f--k you, bitch' were written across it. It was humiliating and confusing. I didn't think I was worthy of that kind of hatred."

"That's why it took me longer than it should have to realize just how important female relationships are," she explains. "It takes vulnerability of spirit to open yourself up to other women in a way that isn't competitive, and that's especially hard in Hollywood, where competition is built into almost every interaction."

"I was once told that I didn't need a tight group of girlfriends because Chris should be my best friend," she admits.

"But I never bought that. The idea of your mate being your best friend—it's overhyped. I really believe that your partner serves one purpose and each friend serves another."

"Today, I'm lucky to have a handful of women I count as confidantes. Among them, Allison Janney, my costar on Mom, Meghan, a friend from my hometown of Edmonds, Washington, and Kate, a dear childhood friend who I probably have nothing in common with anymore—at least from an outsider's perspective—but who totally gets me because... history."