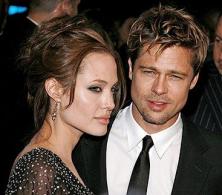 ) has filed for divorce from Brad Pitt after just two years of marriage, her attorney has confirmed.

The attorney said the decision to divorce was made "for the health of the family."

The couple have six children together and had reportedly been fighting for some time, according to sources closes to the pair.

Though they were together for 12 years, Pitt and Jolie Pitt married in August 2014 at a lavish French estate.

This was the second marriage for Pitt, who was previously married to Jennifer Aniston (photos

), and the third for Jolie, who was previously married to Billy Bob Thornton and Jonny Lee Miller.

Pitt and Jolie famously fell in love in 2003, while he was still married to Aniston, during the filming of 'Mr and Mrs Smith'.

"Because of the film, we ended up being brought together to do all these crazy things, and I think we found this strange friendship and partnership that kind of just suddenly happened," Jolie told Vogue in 2006.

"I think a few months in I realized, 'God, I can't wait to get to work.' Anything we had to do with each other, we just found a lot of joy in it together and a lot of real teamwork. We just became kind of a pair."