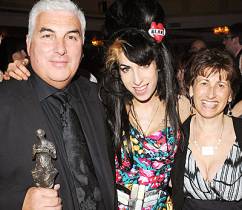 Amy Winehouse's family and boyfriend will be Anderson Cooper's first guests for the September 12 premiere of his daytime talk show.

Winehouse's father, Mitch, mother, Janis, brother, Alex, and her boyfriend, Reg Traviss, will talk about the singer's sudden death and reflect on her life and career.

"I've followed her career for a long time," Cooper tells THR. "Her music is extraordinary. And she's such a remarkable talent."

"What's remarkable about this family is they've been so public before her death about trying to get her help."

Winehouse, who spun hits like 'Rehab' and 'Back to Black', was found dead at her London home on in July at the age of 27.

Despite her well-chronicled addictions to drug and alcohol, an found no illegal substances in her body and the cause of her death remains a mystery.

Anderson Cooper's new talk show will be shot before a live studio audience in New York.

), Daniel Radcliffe, Snooki, and the cast of The Real Housewives of Beverly Hills.