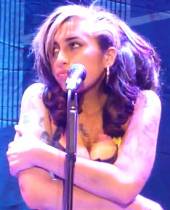 Amy Winehouse has cancelled part of her European tour after being heavily booed for arriving late, forgetting lyrics and behaving erratically on stage during a concert in Serbia.

Winehouse is thought to have been under the influence as she greeted the crowd by shouting 'Hello, Athens', two weeks after leaving rehab for her ongoing problem with alcohol.

The concert in the Serbian capital of Belgrade was to kick off what was to be a 12-date tour of Europe.

Her treatment had been seen as preparation for the tour, until she bombed. Winehouse dropped the microphone, mumbled through her songs and occasionally disappeared, leaving her band to simply keep on playing.

A local newspaper called the concert "the worst in the history of Belgrade."

"Despite feeling sure that she wanted to fulfill these commitments, she has agreed with management that she cannot perform to the best of her ability and will return home," her spokesperson says in a statement.

"She would like to apologize to fans expecting to see her at the shows but feels that this is the right thing to do."

See a video from the Belgrade disaster below: