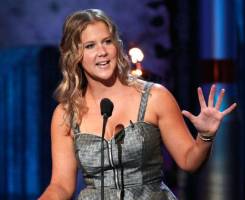 Amy Schumer read a sarcastic apology letter to the city of Tampa, Florida at her show in New York City this week.

This after a few hundred audience members walked out of her show over the weekend in which she criticized Republican presidential nominee Donald Trump and questioned one of his supporters on stage.

"Dearest Tampa: I'm sorry you didn't want me, a comedian who talks about what she believes in, to mention the biggest thing going on in our country right now," Schumer read her letter. "How could I think it was OK to spend five minutes having a peaceful conversation with someone with different views?"

"After the show, I want you to know that I will go straight to a rehab facility that will teach me how to make all people happy - both the rich, entitled, white people who are gonna vote for him and the very poor people who've been tricked into it."

"I will never again say that he is an orange, sexual assaulting fake college-starting monster. Never again."

"Honestly I am so grateful you are all here. And I was grateful for the people in the audience that night, even the people who left. And I look forward to putting this all behind us in a couple weeks when Hillary Clinton is our motherf---ing president."

Schumer has been a vocal supporter of Hillary Clinton's campaign.