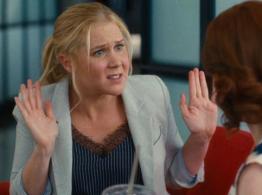 Amy Schumer is speaking out about her disappointment over one of her show writer's controversial comments about rape.

In a now-deleted Facebook post, Kurt Metzger, a writer on 'Inside Amy Schumer', mocked rape accusers and women who claim to have been raped but don't report it to the police.

Metzger, who made the comments after he was accused of rape himself, wrote that labelling someone a rapist without evidence is "like hammering the nails into Jesus My Lord's feet! Or re-raping the victim's good hole. Or asking for proof in a murder trial!"

Schumer, who recently revealed she was a victim of sexual assault, has been taken aback by questions of her association with Metzger.

"I am so saddened and disappointed in Kurt Metzger. He is my friend and a great writer and I couldn't be more against his recent actions," she says on social media.

"Kurt does not work for me. He is not a writer on my show. Please stop asking me about it. His words are not mine."

When fans pointed out that Metzger was, in fact, a writer on her show, Schumer apparently said she was no longer associated with him because she had cancelled her own show.

"I didn't fire Kurt. He isn't a writer for my show because we aren't making the show anymore. There are no writers for it."