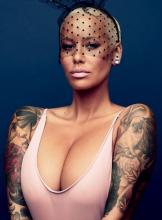 Amber Rose says there's a double standard for men and women. The talk show host says she constantly gets bashed for being a former stripper while actor Channing Tatum never encounters the same reaction.

"He even made a movie about being a stripper! And everyone bought it and they loved it and they were like, 'Oh, my God, Magic Mike, we gotta go see it!'," Rose tells Cosmopolitan.

"But if I did that, people would tell me I was disgusting. I run eight businesses, I'm the CEO of my own company, and still I'm called a stripper. It's so ridiculous."

"We've had the same life, Channing and I, and I'm dumbed down for it. It's not his fault — it's just society."

"Everything I've done, I've worked hard for," says West's former girlfriend. "Anyone can have fame, but I've started companies. I've brought my brand to the next level. Nobody did that but me. No one is going to dim my light."

Rose is currently competing on 'Dancing with the Stars' with pro partner Maksim Chmerkovskiy.