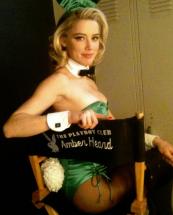 Heard, who had previously announced she was going to donate the entire sum from her settlement to charity, says Depp didn't have the right to donate the sum and earn a tax deduction for himself.

"Amber Heard appreciates Johnny Depp's novel interest in supporting two of her favorite charities, the ACLU for domestic violence and the Children’s Hospital of Los Angeles. This is great and unexpected news," reads a statement by her lawyer.

"However, if Johnny wishes to change the settlement agreement, we must insist that he honor the full amount by donating $14 million to charity, which, after accounting for his tax deduction, is equal to his $7 million payment obligation to Amber."

"We would also insist that the full amount be paid immediately and not drawn out over many years."

"Anything less would be a transparent attempt by Johnny's counsel, Laura Wasser and Patti Glaser, to reduce their client's true payment by half under the guise of newfound concern for charities that he has never previously supported," the statement concludes.

This is the latest salvo between the pair after Depp donated the sum to charity directly, thus earning a healthy tax deduction for himself while ensuring Amber didn't get one in her name.