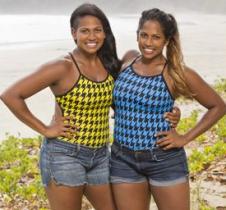 Natalie and Nadiya Anderson, who've had two cracks at the 'The Amazing Race', will be trying to outlast and outplay on 'Survivor'.

CBS has announced the cast for the 29th season of the reality series, this one in San Juan del Sur, that will bring back the Blood vs. Water twist.

It also marks the return of Exile Island, where each week two loved ones square off against one another in a battle that will send the loser to isolation on Exile Island, while the winner receives reward for his/her Tribe. However, the winner will also have to choose a tribemate to accompany their loved one to Exile Island.

Other castaways include former Major League Baseball pitcher John Rocker, who expressed controversial opinions about minorities and homosexuals in an interview over a decade ago. He will be joined by his girlfriend Julie McGee, a model and spray tan business owner, as his loved one.

The rest of the cast includes two firefighters, a Broadway performer and the owner of a cheerleading gym.

The season will premiere on September 24 with a special 90-minute episode.