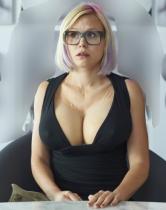 In an appearance on the 'Late Late Show', Alison Pill talks about her absurdly large prosthetic breasts in the movie 'Zoom'.

"At this point, the absurdity of so many fake breasts is such that you have to go pretty darn far," Pill laughs.

"It's an intense look," she admits. "They're massive breasts, truly beyond I think, I hope – most pornography. They're absurd."

But she's more interested in asking Justin Bartha what it was like to pick a prosthetic penis for one of his roles.

"They laid out a plethora of penii," Bartha said. "It was supposed to be based on my own, but essentially you want to go up a model. So I would peek over, and they'd be like, 'Hmmm.'"