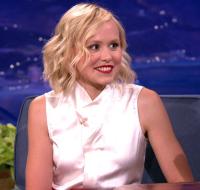 Alison Pill tells Conan O'Brien about the topless photo of herself she accidentally shared last year and says her blackberry was to blame.

"It's a fascinating involving not knowing that my new Blackberry had a touch screen and responding to somebody on Twitter like 'Oh yeah, New York was great. It's 9:30 on a Wednesday and here are my boobs!," explained Pill.

'The Newsroom' star explained she had taken the photo for her fiancee the night and wanted to go into hiding once she accidentally posted it.

"I had one of these pictures on my phone because I had been away from my, at the time, fiancee. And we had spoken on the phone the night previous... anyway."

"See, that's the thing I still can't wrap my brain around," said Conan. "There's no picture of me naked. My doctor's never seen me naked."

"I don't know. I mean it's a dumb thing to do I suppose and now I've realized just how dumb. And so embarrassing. So hideously embarrassing that three months after it happened anytime I met a new person I was just like 'boobs... Nice to meet you. Have you seen my boobs?'"