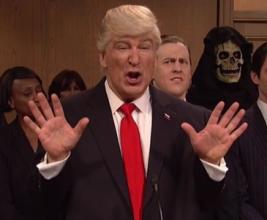 Alec Baldwin took home the prize for Outstanding Supporting Actor in a Comedy Series at the 2017 Emmy Awards Sunday night.

"I suppose I should say, at long last, Mr. President, here is your Emmy," Baldwin said in his acceptance speech, referencing President Trump's long-held contention that he deserved an Emmy for 'Celebrity Apprentice'.

"I want to thank my wife – my wife and I had three children in three years, and we didn't have a child last year during the SNL season," he continued.

"I wonder if there is a correlation there – you put that orange wig on, it's birth control, trust me."

"I always remember when someone told me that when you die, you don't remember a bill that Congress passed or a decision the Supreme Court made or an address made by the president."