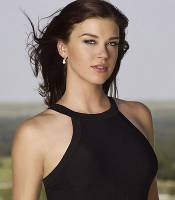 The project, from David E. Kelley, aims to take a more serious look at the superhero as "a vigilante crime fighter in LA but also a successful corporate executive and a modern woman trying to balance all of the elements of her extraordinary life."

Palicki appeared in Fox's short-lived 'Lone Star' last year and has also appeared on 'CSI', 'Smallville' and 'Supernatural'. Her first acting project was director John Woo's television remake of the classic 'Lost in Space', where she played Judy Robinson.

The 27-year-old reads and collects comic books so that could've been part of what drew her to the role.

"I personally fell in love with ‘Super Girl' because it was somebody that I wanted to be," she said in an interview last year. "I was kind of this awkward young kid and my brother read all of these comic books with all these really strong male characters and I was like 'I want to look like her. I want to be her.' And so 'Super Girl' was always my hero."

She also did all her own stunts while starring in 'Legion'.

"Yes, all of them. I kick some ass but it's hard to do when you're playing a pregnant woman."

In the film, the actress played a 20-year-old woman eight months along pregnant with possibly the messiah.