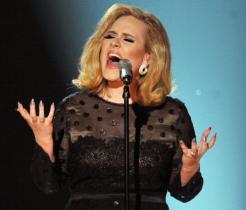 Adele may have flubbed her live performance at the Grammys but she still walked away with five awards Sunday night, including Album, Record and Song of the Year.

She became the first artist in Grammys history to sweep all three of those categories twice.

During her acceptance speech, the 'Hello' songstress said: "It took an army to make me strong and willing again to do it. Thank you all from the bottom of my heart."

"Five years ago when I was last here, I also was pregnant and I didn't know and I was awarded that shortly after... In my pregnancy and through becoming a mother I lost apart of myself. I struggled, and I still do struggle being a mom. It's really hard."

She said her night at the Grammys made it all come "full circle" and that a "bit of me has come back to myself."

The singer also thanked Beyonce: "The Lemonade album was so monumental and so well thought out and so beautiful and soul baring. We got to see a side of you that you don't always let us see."